The superpower I would have is the ability to use magic. The way I would use it for good is that I could bend someone’s will. I would use this on people who have become evil to turn them good. (Sidenote: I would go to the white house and bend Trump’s will so he will do good.)

A person that matters to me is my Grandpa. (The one that lives up here in Maine.)

One of the reasons Grandpa is special is because he likes to take me and my brothers on bike trips. I like this about him because we get to exercise while having fun.

The last time Grandpa, me, & Ian went biking there was a new addition to our team; Rowan! It was a slow bike ride because Rowans only four years old, Grandpa was nice and let me and Ian go ahead of them. (Just if your wondering Grandpa isn’t slow he just stayed back with Rowan.) We went on the Androscoggin bike trail, the one we usually bike on. (It’s even got a dog park.) One of the fun things about going biking with Grandpa is that he thinks of us first, he carries my brother’s water bottles, He makes jokes a lot, and he brings snacks.  Back to the story, It was a short ride because we left at about 2:30 and had to pick Gramie up at  3:00. We rode about 3 1/2 miles to and back and each did three stops. Grandpa loves to take us biking and is thinking about going to a new trail up in Augusta

On Dec. 9th, 2019 New York Times bestselling author and illustrator Matt Tavares pays a visit to a small school in Bowdoinham ME.

Bowdoinham community school students were excited when Mrs. Russell’s voice came over the intercom telling Bowdoinham to go give  Matt Tavares a warm welcome. It was an amazing event having a New York Times bestselling author come to this school and talk about his work.

Matt showed BHM his studio where he makes his books.  He told Bowdoinham that one of the tables that he used for his art he got for his birthday when he turned ten years old.  Matt also didn’t just use pencil sharpie and watercolor, he also now uses this special tablet that plugs into the computer that has this special pen that when you draw on it appears on the screen.  Matt also told us that he can move the picture around which Matt can’t do on paper.

Matt told BHM he didn’t just write a story and publish it, he had an editor that looked at his work and highlighted the sentences that would need work.

Mr.Tavares showed BHM his book Growing Up Pedro.  After he got the idea for the book he traveled to the Dominican Republic where Pedro Martinez grew up.  There were plenty of pictures of a grown-up Pedro so Matt wanted to find a kid who could be a kid Pedro.

Luckily he found a kid that Matt thought would be a good Pedro as a kid,  just there’s one problem… The kid was left-handed but Pedro is right-handed. But with every problem, there’s a solution.  Matt found out if he flipped the picture it looked as if the boy was throwing right-handed.

Matt also studied the houses that were still there when Pedro was a kid.  They are like old run-down shacks but they all serve a purpose in the community.  Then he found some kids playing baseball and thought that would be a good part of the book.  So he put them all in the book. (Growing up Pedro made the 2016-2017 MSBA list!)

He then showed BHM how he drew the pictures in his New York Times Bestseller Dasher.  First, he visited a zoo in Massachusetts to see the reindeer and look at their features so he could draw Dasher the reindeer.  After that Matt had a special visitor… SANTA CLAUS! Mr. Tavares had Santa do different poses for his book like riding a sleigh for example.  Then Matt had to draw a horse and a sleigh so he visited a horse farm so he could look and see which horse would be the best for Santa’s horse Silverbell.  Then he had to find a sleigh that kind of looks like Santa’s sleigh. Luckily there was a sleigh at the horse farm and it looked a lot like Santa’s sleigh. Matt told BHM that he took pictures so he could remember them.

Matt then showed us how he drew Dasher.  He used a sharpie which some students thought was strange because you can’t erase permanent marker.  Then Mr. Tavares asked what the shape the body of a reindeer is like. A student said “An oval!” so he lightly drew that.  Then Matt kept on asking these questions until we had a lot of shapes together that kind of looked like a reindeer. Then Matt got in on the details! He started giving Dasher’s head detail and outlining her body. 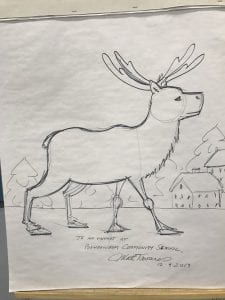 After the assembly students and teachers went back to their classrooms while waiting for their drawing class with Mr.Tavares.

Some BHM kids got to eat with Matt Tavares in the learning commons and those students were Jae, Cadence, Nori, Braden and Rueben.

In the drawing, class kids drew using their imagination, a line from Matt Tavares’ book Red And Lulu, and no erasers!

The kids and teachers were sad at the end of the day because it was now time for Matt Tavares to leave.  But it was a fun time having a NY Times Bestselling author and illustrator come to this school! 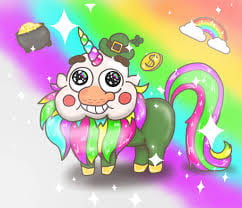 So a while back me, my friend: Solomon and our brothers: Ian and Rueben went into Solomons woods carrying shovels so we could rip an old tree apart we called “The Monster Tree” Because we used to think It was full of monsters!

Then on one fateful day while we were looking for monsters we heard this rumbling and the faint sound of Irish music!

We were really excited when a Leprecorn jumped out! Until it started chasing us and playing a continuous loop of “Dandy Boy” from its horn and dropping plastic coins.

Before it could knock any of us down Solomon hit it with his shovel and it then started puking rainbows.

After it was done with that it started chasing us again! And this time it knocked me down and was poking me with its horn.

Solomon started hitting it again but the Leprecorn parried it with its horn and tased him. So now Solomon’s KO’d and I am on the ground with a Leprecorn and a bunch of scratches.

Before I passed out myself I yelled: “Ian, Rueben go get Reeve!”The last thing I saw and heard was Ian and Rueben running toward the house and the crunch of leaves.

I woke up to a loud bang and the feel of wetness. I looked up and saw a dead Leprecorn and a bunch of liquid rainbows. “Eww,” I said, “What is this stuff!”  “Leprecorn blood” Ian explained “H…H…HOW DO I GET THIS OFF!!!!!!!!!” “Huh?” Solomon just woke up. And he was so drenched in Leprecorn blood I didn’t even know he was there.

“You can just shake it off and you wouldn’t even think you got drenched!” Ian and Rueben yelled in chorus.

I and Solomon shook off and just like that the rainbow blood was gone!

“Uhg!” Ian groaned as he started to shake the liquid rainbow off him. Rueben and Reeve followed suit.

After a few seconds, all the rainbowyness was gone. After that, we heard more rumbling. “Oh-no!” I yelled over all the rumbling, “Way more Leprecorns! And these ones are MAD!” “Reeve! How many shells do you have left!” Ian asked. “Twenty!” Reeve answered.

The ground EXPLODED! Hundreds and hundreds of Leprecorns came flying out of the ground all with the telltale smile on their chubby faces!

They charged at us leaving a colossal patch of four-leaf clovers in their wake.  “FIRE!” I commanded Reeve. BANG! BANG! Two shells have gone eighteen to go. “To the House!” Rueben yelled. We will be safe for a few minutes. Just enough time to get weapons!” “Like what?!” I wondered. “KNIVES!” Ian yelled over the galloping of Leprecorns.

“Get inside!” Reeve yelled at us. “But what about you?!” We yelled in chorus. “I’ll shoot ‘em!” Reeve answered, “Now get inside!” We obeyed him and went inside without question.

“Now what?” Solomon asked, “Now, now we get knives.” I told him. We found the biggest knives we could find and went outside to help Reeve.  We found him lying on the ground KO’d with a bunch of Leprecorns.

We lived through them for a few minutes until we were on the ground with Reeve. Thunk! SPLATTER! Leprecorn blood went everywhere because all four of us stabbed the Leprecorns that were on us in the stomach.

We finally got up and sliced most of the leprecorns in time to wake Reeve up and for him to shoot the last fifteen shells in his gun.

“Reeve! Go get a knife!” I yelled at him. “Naw, I can use my gun handle,” Reeve answered surprisingly calm. “How can you be calm at a time like this?! We might get killed!” I angrily yelled at him. “Wo Wo. Don’t get mad it will drive you crazy and get you killed.” “Maybe he’s right. I should calm down.” I thought to myself.

WHAM! BOOM! A Leprecorn just jumped about ten feet in the air and came slammed its horn into the ground and sending an electric charge which threw us down and almost broke Reeves’s phone. Thank god it didn’t break. The Leprecorns were closing in so to buy Reeve time we sliced and diced. A few minutes later the police came and started shooting the Leprecorns. One of them was on his walkie-talkie saying something about the government.

An hour later police were out of bullets so they started using their tasers to shock them while me Solomon, Rueben, Ian, and Reeve kept hitting slicing and dicing. There seemed to be infinite Leprecorns.

We soon heard the sound of yelling and then someone yelled: “Get down!” Then we heard the unmistakable sound of a minigun.

It took two hours but we finally killed all the Leprecorns and captured ten to be examined. The national guard bid farewell and left. We didn’t mention any of this to anyone until now.